Andrzej Malinowski His life in five steps, by Jola Zielinska

Born into a modest family, he spent his childhood in a post-war climate tinted by dark grey and red flags.

Feeling trapped on all sides he looked for a light, far ahead. This light at the end of the tunnel revealed itself as the “ideal of beauty” and he set upon on a frantic quest towards it.

He read anything that fell into his hands. Deep in his heart he collected rare snatches of beautiful music heard on the radio. Lucky enough to have access to musical instruments thanks to his stringed-instrument making grandfather, he strummed wood and strings. However beyond all this he was offered a wonderful world of images and absorbed, like a vacuum, everything that passed before his eyes: paintings in local churches (a maternal influence), images of communist propaganda from his father’s side, and rare memories of museums...

All of this was a permanent enchantment without any external filter or value system; and with each discovery a new world opened up to him.

Gradually this charmed child grew to think he too could be an “enchanter”, and attempted sketches and watercolours. To his great surprise these delighted those close to him, and he began to perfect his burgeoning talent, dazzled by hopes of an artistic career. As he grew, his choices and fields of enquiry matured. He began reading the classics and discovered the great names of painting through art book reproductions. It was in this way he encountered Vermeer and Rembrandt, and even if the images did not match the originals and he would later find other passions, he never abandoned these first loves.

Still unsure of who he was and what he might make of his life, he passed the entrance exams for the Warsaw Academy of Fine Art. Six years followed in an artistic context where “without Marcel Duchamp, point of salvation” - the conceptualisation of art was already on the move.

For someone who wanted to paint like Vermeer or Rembrandt, the undertaking was senseless.

Nevertheless, a good student, he complied and completed his master’s degree at the Warsaw Academy of Fine Art in 1973. Overall, this period was a happy one and luckily did not dent or alter the young graduate’s soul.

However he was now prey to two contrasting feelings: that of having returned to his point of departure, and that of wanting to go further. The dreamy image of Paris, an Arcadia of Arts and Literature, led to his departure for France.

Suitcases full of hope, ambitions and dreams, he was confronted with the reality of his new life, earning a living as fast as possible with the addition of a baby. How can one earn a living in a foreign country without speaking the language and without friends?

Having tested some survival options and with the duchampian dogma still set aside, he settled on illustration. This choice of a domain where “accomplished” figurative painting and narrative were not yet banished, was confirmed by a first place prize for Film poster at the Deauville Festival Film in 1977.

During this period spanning 1974-1977 he established himself in publicity and film poster illustration. He illustrated, illustrated, and illustrated, his name set next to prestigious ones in the fields of publicity and cinema, broadcasting, publishing and the press. He garnered numerous awards, honours and recognition and presided over juries.

In 1982 he was granted French nationality.

Unfortunately, or possibly fortunately, the growing collective power wielded by “new generation” commercial directors in broadcasting slowly whittled down any space for originality and artistic sensibilities. The growing ascendancy of new digital imaging software equally rendered obsolete the notion of artistic personality in this domain, at least in its beginnings.

It was in this context that Andrzej Malinowski found himself facing the dilemma of whether to “live” or “have”. At the age of 45 he made the choice to leave the downy but suffocating bosom of show business and become a “young” artist painter.

He left Paris for the rolling green hills of the Val d’Oise, one of the most beautiful areas in the Ile de France region. Here, the surrounding forests, stunning views and real human interaction breathed new energy into his life and work.

Opening his suitcases once more he found nestled in the depths, crumpled and parched, the remnants of his hopes, ambitions and dreams. To these he added what had stayed with him of his “illustrative” adventure: THE MASTER-CRAFT OF PAINTING AND COMMUNICATING THROUGH IMAGES. As an independent artist he began to explore the themes underlying his painting. Naturally, he chose what held for him the promise of a realised and shared happiness: a Woman “to dream of” and a Landscape “to wander through”.

That these themes have already been universally explored since the dawn of time only reaffirms his choice. It proves that these “sources of dream” are loved and inexhaustible.

Certainly, to play the “big man” he could have used broad strokes to grossly play on themes of suffering, HAPPINESS BEING LESS PHOTOGENIC THAN PAIN. Yet, for modesty, he chose not to spill his guts but rather, spread wide the blue wings on his back. 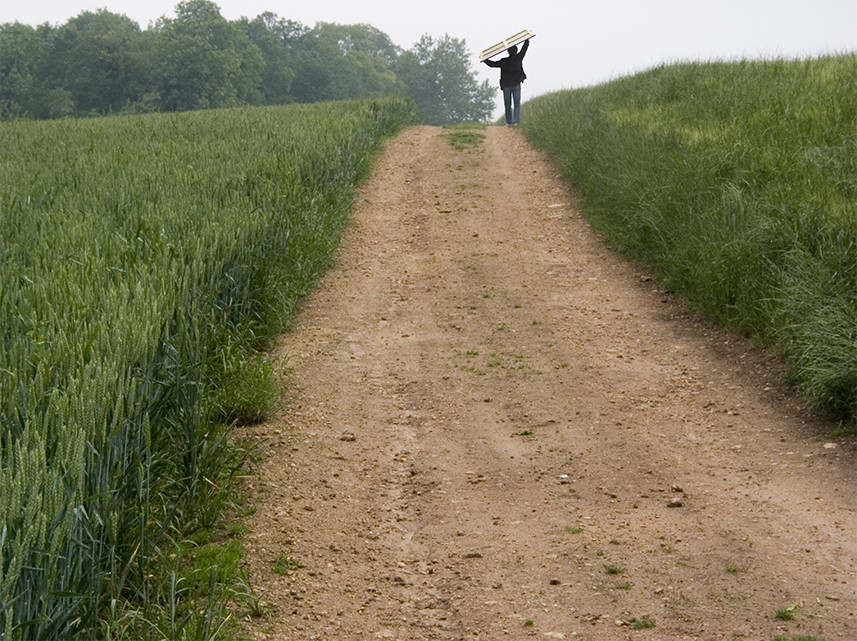